The Greek port city of Salonika was home to around 56,000 of Greece’s 76,000 Jews before World War II. There were centers of Jewish learning and many esteemed rabbis.

These days, the city’s Jewish community numbers 1,200, according to Marcia Haddad Ikonomopoulos, director of the Kehila Kedosha Janina museum in New York. To commemorate the city’s rich Jewish history, Ikonomopoulos and others are raising funds to build the Holocaust Memorial and Human Rights Educational Center in Salonika.

“We’re living in troubled times now. As you all know, there’s been a rise in anti-Semitism throughout Europe and here in the United States. We’ve  become easy targets in times of economic crisis,” she said. “It’s no different in Greece. Never has it been more important to have a center to educate.”

Iknonomopoulos calls herself a daughter of  Salonika — her grandfather made aliyah to Haifa after Salonika experienced a devastating fire started by the splattering of oil from cooking eggplant.  Her grandfather lost his 10 older brothers and  sisters, their spouses, children and, in some cases, grandchildren during World War II.

The multimillion-dollar project, which consists of an octagonal tower, a low ring-shaped building and a public plaza, would include a museum,  cultural center with a permanent exhibition hall, a temporary exhibition hall, an auditorium with 300 seats, study rooms for lectures and seminars,  multipurpose spaces and a café. The center, which would be more than 130,000 square feet, will be located in an open plaza at the end of the rail lines that were used for deportation of the local Jews.

It was no ordinary night at The Black Olive, as Spiliadas and his wife Pauline, the restaurant’s head chef, made sure to feature the food of Salonika’s Jewish community, which meant a whole lot of eggplant. A lot of the Jews in Salonika were Sephardic Jews from Spain, so the food was a sort of Sephardic Spanish-Greek Jewish fusion. There was bourek, a pastry filled with eggplant and lamb, flava bean salad, chicken on top of eggplant and, what Spiliadas’ said was the most special dish, moussaka.

“Moussaka is the memory and history of the Jews who are left in Salonika now,” he said.

The moussaka was topped with a thick buttermilk sauce, representing the “upscale” influence from Europe. The ground meat below was reminiscent of influence from Turkey and Italy.

“At the very, very bottom is eggplant; the memory of the Jewish community, which, after the years passed by, was covered and sometimes almost  forgotten by time and the pain that was to take place from 1942 to today,” he said. “I would like for you to enjoy moussaka, but dig in to find the  eggplant. Please bring it up to the surface, and  remember our brothers, our sisters, our children in the embrace of their mothers facing the most horrible, horrible death that anybody can even imagine.”

Spiliadas is not Jewish but has Jewish grandchildren and grew up in Patras, Greece during the time of Nazi occupation. His interest in Salonika stems from his connection to Greek’s progressive party and his desire to dispel the myth of Jewish  passivity during the Holocaust, knowing that the country’s Jewish population fought alongside the  resistance in the Greek army.

On a trip to Israel in the early 2000s, BJC executive director Art Abramson connected Spiliadas to a survivor from Salonika. The man told Spiliadas about growing up in the Greek city, introduced him to other Greek Jews in Tel Aviv and gave him a memoir written in Hebrew that Spiliadas hopes to translate.

“There were tears in my eyes because here was a man who survived Auschwitz playing the accordion and making believe that he was a crazy Greek who needed to be there to entertain the Nazis,” Spiliadas said.

Abramson briefly addressed the crowd after the meal to emphasize the importance of Holocaust  education. He spoke about GOP presidential candidate Ben Carson’s “absurd” notion that the Jews would have been better off during the Holocaust if they were armed, as well as Israeli Prime Minister Benjamin Netanyahu’s assertion that the Grand Mufti gave Hitler the idea to exterminate the Jews.

“This is all about the misuse of history, and it is vitally important that we do what we can do to end this misuse of history,” Abramson said. “If you’re blaming the victims and you’re excusing the  Germans, we’re in 1984 again,” he said referring to the George Orwell book.

“We need this center, and we need more Holocaust education, not less. There’s nothing more important right now than making sure that the memory of the victims and the lessons of history are  preserved,” he said.

The event raised about $1,500 for the center, and checks are stillcoming in. The center may get a boost, as the German government, which should soon vote on reimbursing Greece for train tickets the Jews of Salonika and other communities were forced to  purchase for their deportation to Auschwitz.

Iknonomopoulos closed her talk by underscoring how essential Holocaust education is in Greece.

“I long for the day when there are two things I never have to hear again. One is, ‘Do you mean there were Jews in Greece?’ Believe it or not I still hear that,” she said. “And number two, ‘Was Greece involved in World War II?’ Believe it or not, this is what I hear when I lecture.” 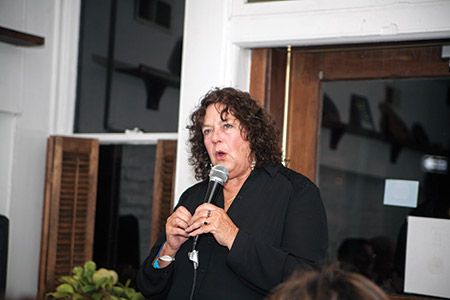 Marcia Haddad Ikonomopoulos, director of the museum at Kehila Kedosha Janina in New York, speaks about a proposed Holocaust education center to be located in Salonika, Greece at a fundraiser held by the Baltimore Jewish Council at The Black Olive restaurant.