THE HOLOCAUST OF THE JEWS OF THESSALONIKI

The Germans enter Thessaloniki on April 9, 1941. A few days later Jews are banned from cafes, pastry shops etc. The Germans imprison the members of the Community Council, order the Jews to turn in their radio sets, occupy the Hirsch hospital, as well as many Jewish-owned houses, and loot the Community offices and the richest Jewish libraries.

On July 11, 1942, all Jewish men aged 18 to 45, are ordered to report at Liberty square. There, after being subjected to indescribable humiliations, they are registered and taken away for forced labor. The Community had to pay the huge sum of 2.5 billion drachmas to the Germans, in order to set them free. By the end of the same year, the Germans will confiscate the thriving Jewish enterprises and desecrate and destroy the immense, 2,000-year old Jewish cemetery of the city.

On February 6, 1943, an SD committee (Sicherheitsdienst-security service of the German Reich) arrived in Thessaloniki. It was headed by SS-Hauptsturmfuehrer Dieter Wisliceny and SS-Obersturmfuehrer Alois Brunner (SS captain and first lieutenant respectively). This delegation put in motion the mechanism for the final annihilation of the Jews : they were forced to wear the yellow star of David, according to the Nuremberg Laws of 1935, and to live only in designated neighborhoods (ghettos). The use of public telephones and transportation was prohibited. Disguising their true intentions, and using Chief Rabbi Koretz as their instrument by appointing him president of the Community, the Germans claim that their end goal is the restructuring of the Community into a self administered entity, located in an autonomous area within the city, with its own mayor and Chamber of Commerce. They also appoint a Jewish Militia (Juden Ordnungspolizei), and Jewish citizens are ordered to fill out detailed questionnaires about their assets.

On March 6, 1943, the German occupying authorities prohibit the exit of the Jews from the Ghetto confines, while at the Baron Hirsch neighborhood (thereafter a transit camp), the stage for the final act of the tragedy is being set. It is there that the human herds will be lead, ready to be delivered for slaughter. The first rail convoy departs on March 15 for the extermination camp of Auschwitz / Birkenau. Consecutive convoys, a few days apart from each other, will carry in a few weeks time, the Jews of Thessaloniki, piled in cattle rail cars, to their place of extermination.

At this point, we should stress the admirable stance of those non-Jewish compatriots, who, at the risk of their own lives, offered sanctuary to many Jews. The Church, the National Resistance movement, and the State Police set the example, followed by ordinary people offering help and shelter whenever possible, revolting in horror to the crime being committed, even though, at that time, nobody - not even its very victims - could grasp its actual magnitude. One cannot forget the repeated initiatives of the head of the Metropolitan See of Thessaloniki, Gennadios, against the deportations, and most of all, the official letter of protest signed in Athens on March 23, 1943, by Archbishop Damaskinos, along with 27 prominent leaders of cultural, academic and professional organizations. The document, written in a very sharp language, refers to unbreakable bonds between Christian Orthodox and Jews, identifying them jointly as Greeks, without differentiation. It is noteworthy that such a document is unique in the whole of occupied Europe, in character, content and purpose.

Out of the 46,091 Jews that were deported to the extermination camps, only 1950 returned alive, i.e. approximately 4%.

The first post-war years were particularly harsh: the survivors encountered readjustment problems, mainly with respect to health care and the coverage of their basic economic needs. Quite a few emigrated to the USA and to Israel. The rest tried to build a new life on the ruins of the Holocaust. Today, half a century after the irrevocable disaster, Thessaloniki numbers no more than 1,200 Jewish souls.

The Community maintains two synagogues, a communal center hosting recreational, religious, literary and artistic events, a primary school, an old-age home, a museum, and a summer youth camp. The Community is still prominent in the financial, social and cultural life of the city. Furthermore, the Community financed on its own the construction and dedication of the "Hellenic House" at the Hebrew University in Jerusalem, a project for which it was honored with an award by the Academy of Athens. The Municipality of Thessaloniki rewarded the Community for its wide-ranging and long-standing contribution to the city, by dedicating, in 1986, a city square to the memory of the victims of the Holocaust.

Thus, the Jewish Community of Thessaloniki managed to emerge from the horor of the Holocaust, however decimated, and to keep on constituting an important element of the cultural and economic life of the city, setting an example of vitality, tenacity, and intellectual strength. 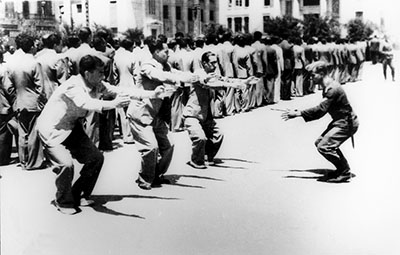 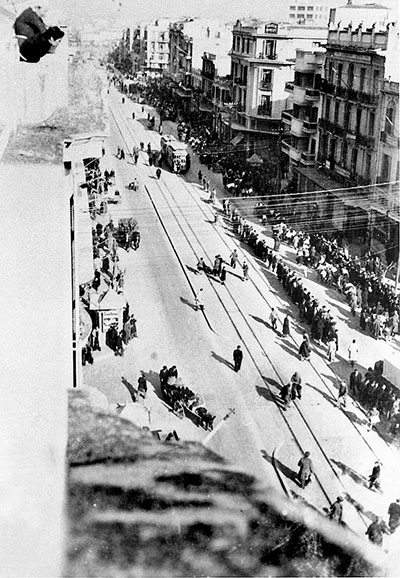