Jewish community of second-largest Greek city hoping to fund Holocaust memorial on site of train station from which Jews were sent to death camps.

The leader of the Jewish community of the second-largest city in Greece is seeking 20 million euros from Germany to compensate Greek Jews for having been forced to pay their own train fare to Nazi death camps in 1943, Newsweek reported Monday.

David Saltiel, president of the Jewish community of Thessaloniki, is hoping any compensation funds the community receives will fund a Holocaust memorial project that would include a monument, an educational facility and a human rights center, "for the Balkans, for Europe and for everybody to study and understand what happened during the Holocaust," Newsweek said.

“We think it’s a big opportunity that if the German government decides they want to help, it would be a very good coincidence that this money goes for this purpose,” said Saltiel.

He said the memorial would be built on the site of the train station from which Jews were sent to the death camps during World War II.

The total cost of the train fare came to more than 2 million Reichsmark, the equivalent of about 25 million euros today, Newsweek said.

Last week Greek Jews commemorated the 72nd anniversary of the first deportation of Jews from Thessaloniki to Auschwitz. The city, also known as Salonika, had the largest Jewish community in Greece before World War II, with a Jewish population of about 50,000 at the time of the German occupation of Greece in 1941, says the United States Holocaust Memorial Museum.

The Nazis deported more than 45,000 from Thessaloniki to Auschwitz, most of whom were gassed on arrival.

"During the years 1941 to 1943, the ancient and vibrant Jewish community of Salonika was destroyed," the Holocaust museum says.

Altogether, at least 60,000 Greek Jews – more than three-quarters of the country's Jewish population – died in the Holocaust, according to the Yad Vashem Holocaust museum and research center. 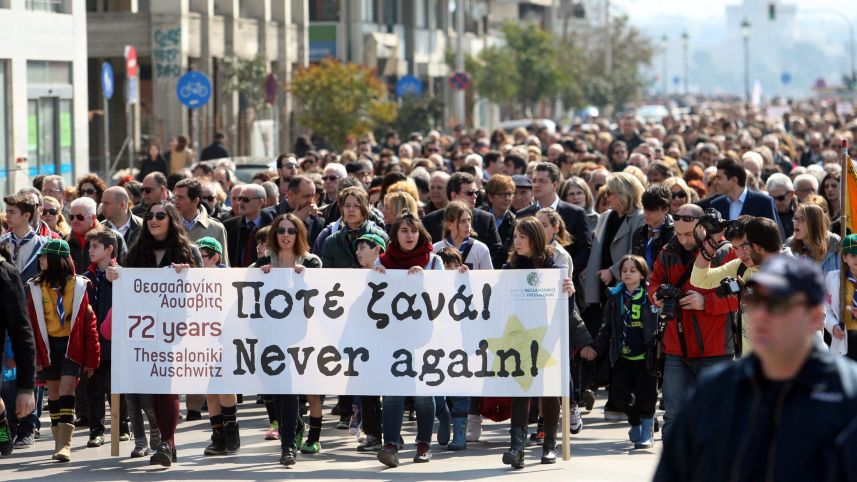 Hundreds of people march to the old railway station in Thessaloniki during a commemoration ceremony marking the departure of the first train from the Greek city to Auschwitz, March 15, 2015.